How to store-and-forward messages in OSB and never lose them. 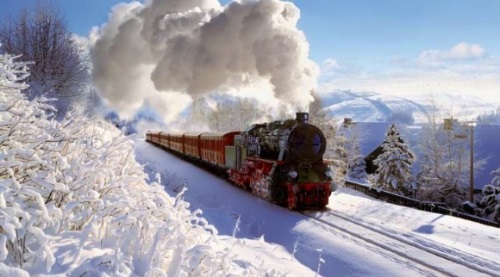 In asynchronous mode, a caller disconnects before OSB delivers the message.

If there is a temporary error, OSB has to save the message and retry the delivery later.

How to implement it correctly? What typical mistakes should we avoid?

Let’s formalize our needs. We have three parties: a message producer, OSB and a message consumer.

To follow the typical SOA architecture, both message producer and consumer use HTTP to send and receive their messages.

The producer can only be confident that the message was received by OSB when OSB responds with HTTP 200.

OSB must persist the message before replying with HTTP 200, and the producer must always check the response code:

(*) Yes, this creates a possibility of duplicate messages - so-called “at least once” guarantee (meaning “once or more”). I’ll show how to deal with it later in the post.

At any point after the message has been accepted, any eventually recoverable* error (OOM, network errors, JVM crash, …) MUST NOT prevent the message from the delivery when the functioning is restored.

(*) The network can be brought up, the JVM can be restarted. But if a HDD cannot read back the message that was written onto it, is not a recoverable error and you cannot expect any messaging system to recover from it. That kind of problems must be solved on the hardware level (e.g. by implementing RAIDs).

In case of any uncertainty OSB retries the delivery. This is the only way to have “at least once” guarantee implemented over a non-reliable protocol:

JMS as a Foundation for Reliable Messaging

Reliable messaging in OSB is implemented over the JMS layer. It already has everything needed, we only have to configure it properly and provide the adapter proxies. 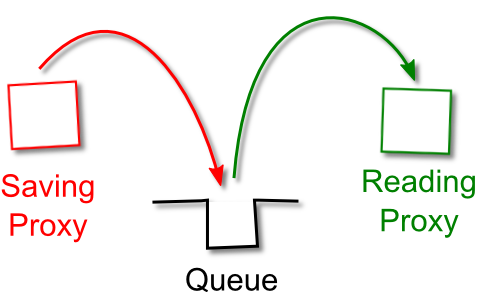 The main building blocks in JMS are queues (and also topics, but they are not for this post).

A queue allows to place a message into it, and then retrieve it from another end. What’s important for reliable messaging, a queue can be persistent, meaning the message is saved in a store that survives the JVM reboot. Typically that store is a special file, but could also be a database.

Persistent store along though is not enough. We also need to employ the transactions.

Imagine that OSB is ready to send a message to the consumer. It reads the message from the queue. The message now is in memory, and not on disk anymore. And at that very unfortunate moment the JVM crashes, causing the loss of all in-memory data, including our message.

This is not very reliable!

To prevent this, JMS queues allow to retrieve the message in a transaction.

Only when the reading proxy confirms the message was delivered successfully, the message will be removed from the disk storage. In case of any recoverable error (a fault, even the whole box crash) the message remains in the queue and will be re-processed when the cause of error is corrected.

To use a queue in a transactional context, we should connect to it using a connection factory with transactions enabled (so-called XA): 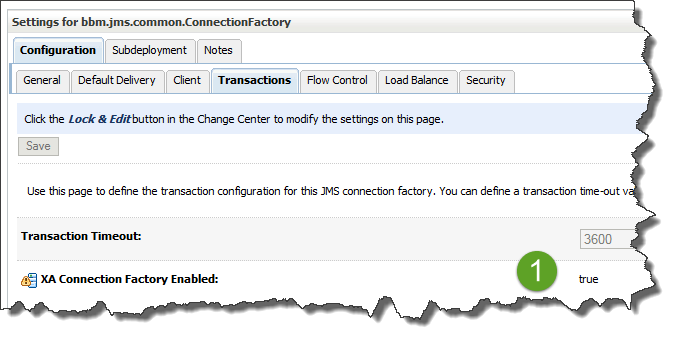 JMS queues allow to configure the retry interval (say, we want to retry every 60 seconds), maximum number of retries and what to do with the message when it is tried for too long.

Our options include just dropping it (not good for our purposes) or placing it into a separate error queue (usually for support to handle it). 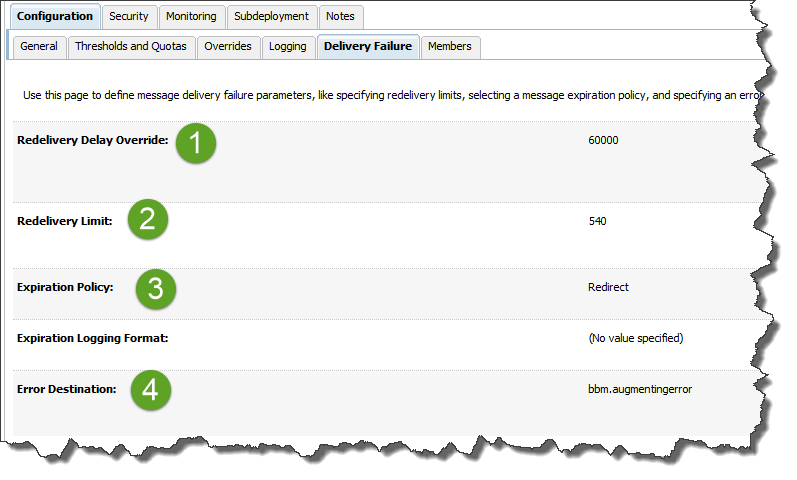 Let’s assemble all these parts into one design. 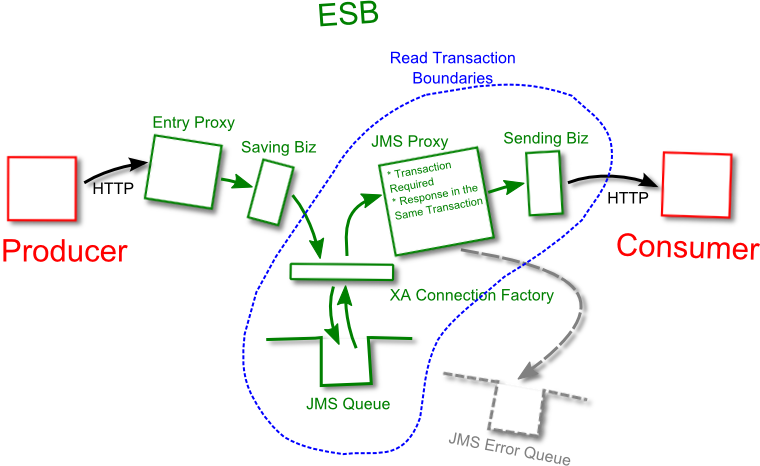 The URL should look like jms:///tx.cf/TestTransactions, where tx.cf is an XA-enabled connection factory, and TestTransaction is the JNDI name of the queue. 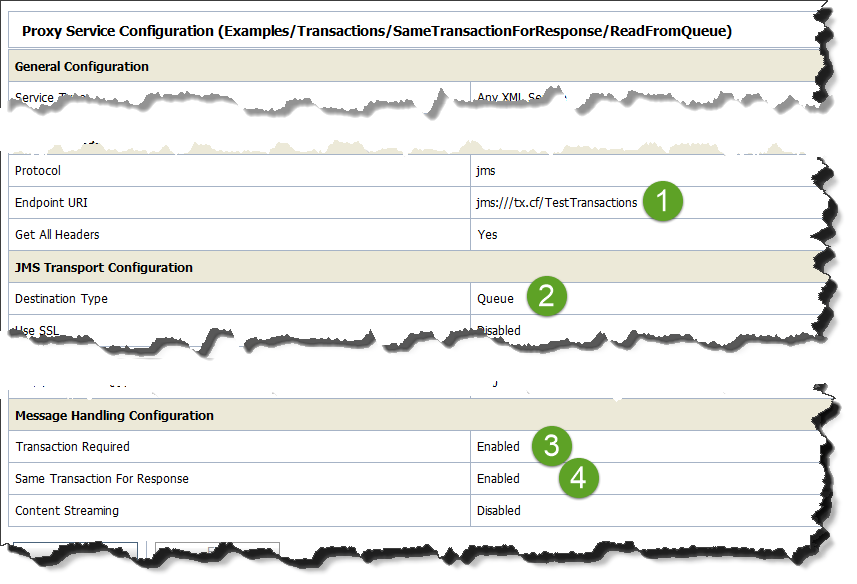 Important implementation detail – it should raise an error in the error handler, if it has one. Reply-with-Error step is not generating a fault and hence does not roll back the transaction: 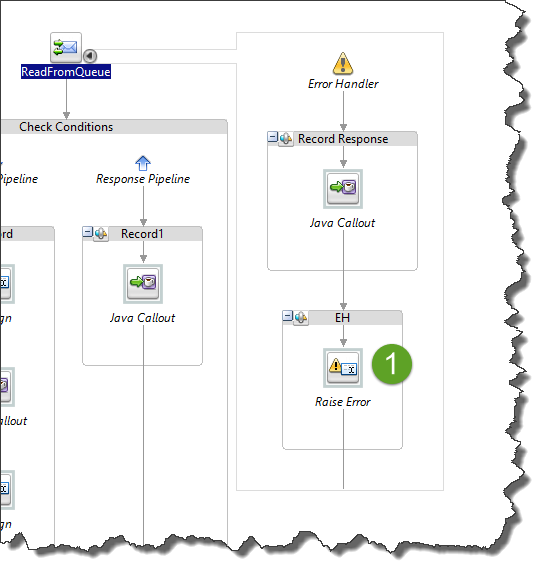 Why Response in the Same Trasaction?

As you can see, the majority of work related to reliable aspect is done in the JMS reading proxy. It has the transaction that guarantees the message is not removed until the consumer receives it.

But why we need “Response in the Same Transaction” flag? Shouldn’t “Transaction Required” be enough?

The answer is in the OSB threading model. The thread that reads the message from the queue and then sends it to the consumer is not the same thread that waits for the response.

At this point we do not know if the consumer has received the message (timeout doesn’t give us any information), and we do not have the message in the queue to retry.

To prevent this from happening, Thread2 should be placed into the same transaction as Thread1.

From “At Least Once” to “Exactly Once” by Eliminating Duplicates

As I said already, the HTTP links in our design are not reliable.

From time to time, the message does reach the recipient, but the sender cannot tell (due to timeout errors or dropped connections), so the sender performs a retry, and now the recipient has 2 identical messages.

We’re lucky if the messages are idempotent, i.e. their duplicate processing doesn’t cause any problems. For instance, a request to change a user’s phone number can be considered idempotent if received in a short timespan (as it is usually a case with temporal failures).

How to deal with it?

The answer is to eliminate the duplicates based on message id.

Every message entering the system must have an unique id. The id is generated by the producer application.

It is important that any retry attempt by the producer uses the same id for a message! Otherwise the same message may enter OSB under different ids, and these duplicates cannot be eliminated.

Sometimes this id could be a natural value from the business domain (say, account# plus the invoice#), but more often the id is generated as a random artificial value.

Eliminating Duplicates on the Consumer

The consumer is expected to have some shared storage, usually a database, where it can check if the message has been processed already. If it was, the duplicate message is just dropped.

The check for duplicates is usually very fast and performed against a DB index.

In the default install, OSB’s managed servers do not have a shared storage. One message instance can be delivered to one managed server, while the second one - to another, and hence OSB cannot detect and eliminate the duplicates.

At the same time, in many configurations OSB is deployed with access to either Coherence or third-party shared in-memory storage.

OSB’s managed servers can place the ids of the messages they see into such storage, and consult it again to check if the message is a duplicate.

The best place to check-and-drop is right before the message is placed into the queue. If the check is moved into JMS reading proxy, every time a message is retried the same id will have to be checked, and the proxy will not know why there is a duplicate – is it because it was already processed by another node or because of the retry?

Do NOT Use Biz Service Retries

Some people ask me if using retry count in the Biz service configuration is sufficient.

It is not. In fact, it is an easy way to make your service unreliable.

Imagine again that the message is retrieved from the queue and sent to the consumer. Consumer is not available for one reason or another, and Biz service retries the message a few time, but then what? What should it do with the message?

It can only drop it. Even the option to place it into the error queue is not available anymore.

Any JVM-wide error that happens during Biz retries immediately loses the message, too.

I do not even mention that the Biz-based retries are holding a thread, potentially causing the resource exhausting!

Do NOT Re-Insert into Queue in Code

I have seen a code that doesn’t use transactions. Instead, when a fault occurs, it insert the message back into the same queue.

This approach has 3 issues:

First, this messaging is not reliable. If at any moment from the message read to its re-insertion the JVM experiences an OOM or crash, the message is lost forever.

Second, it takes more work and makes the code not as clean as transactional option.

Third, such a code loses Unit-of-Order (UOO), if such order is needed or will be needed in future. The message that was first in the queue, becomes the last.

JMS subsystem is rather noisy when you read the logs.

When you use transactions and those transactions have to be rolled back from time to time, logs become inflated with JMS writing long stack-traces into it - the information nobody really needs.

To get rid of those unwanted messages, use Log Filters.

Configure it on the domain page: 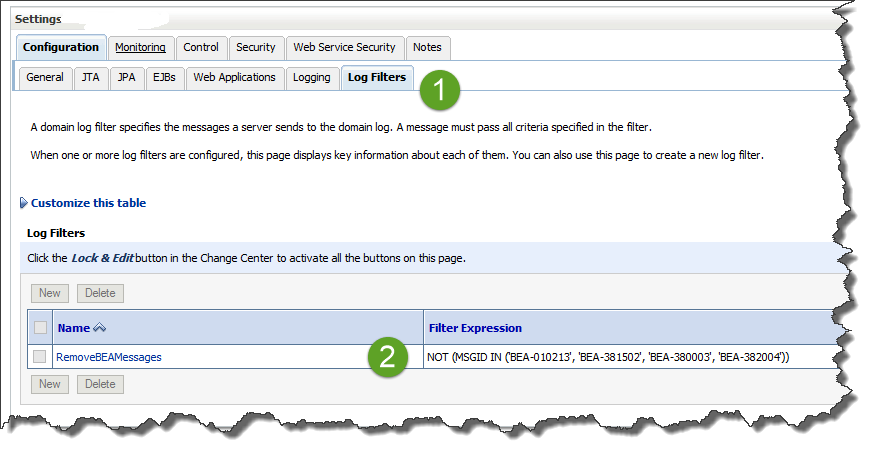 The filter condition there is:

Then assign it to every managed server’s log file, under Logging->General->Advanced->Filter*

To keep the tab on the system, log the important waypoints for each message id. For example, log “Id 12345 saved into queue”, “Id 12345 sent to consumer”, and so on. Then you’ll always be able to search the logs by the message ID and restore the whole history of the message.

I have implemented a test project that validates the design outlined about.

You can freely download it and play with it.

The package also includes a SoapUI project to test the functionality.

The tests are based on recording the message’s flow through the stages – how many times it got read from the queue (will be multiple times if the transactions are rolled back), and if it reached its final destination – a proxy called Validator.

Feel free to modify it and see how the behaviour of the system changes. 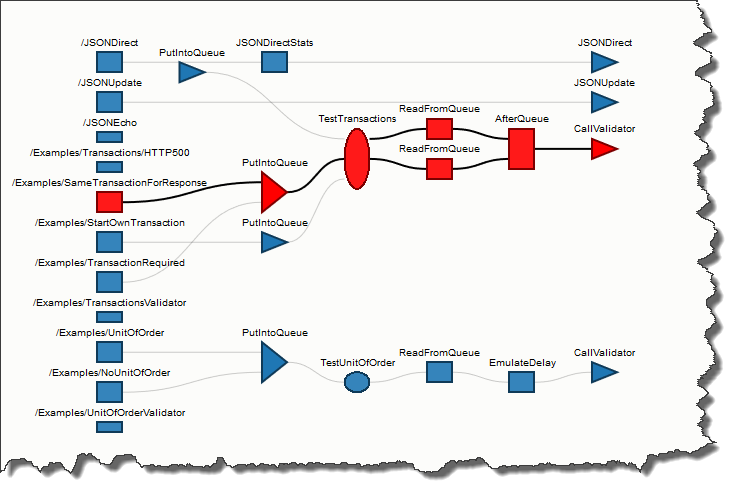