How To Hide Dependency Libraries in an OSB Callout JAR

How to place dependency libraries into a JAR and hide them from the callout dialog. 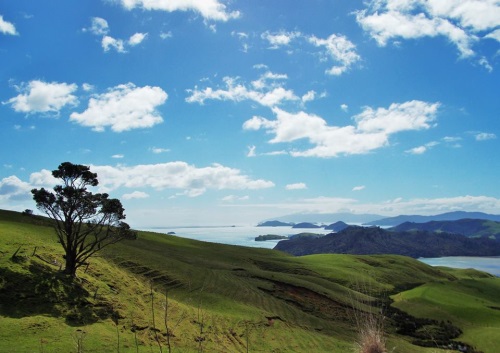 Sometimes we have to use OSB’s Java callouts. On many occasions the callout Java code requires the use of external libraries (dependency JARs).

Here comes the problem: how to deploy these dependency JARs?

Should we deploy the dependencies as JAR resources right into the OSB project?

Or should we package them into the callout JAR itself?

I found a relatively simple solution that may be the best of both worlds.

Packaging Inside a JAR… Not That Easy.

For my JSON-to-XML-for-OSB library, I needed to use Argo JSON JAR.

However, I did not want my library’s users to deploy the Argo JAR separately because:

My choice was to package Argo right inside of my JAR.

In my build script I have unpacked the Argo JAR into the build directory, and then packaged it into my own JAR along with my own classes. Easy, eh?

But when I tried to use the JAR in the Callout step, instead of the single class I intended to expose, I saw dozens of classes. 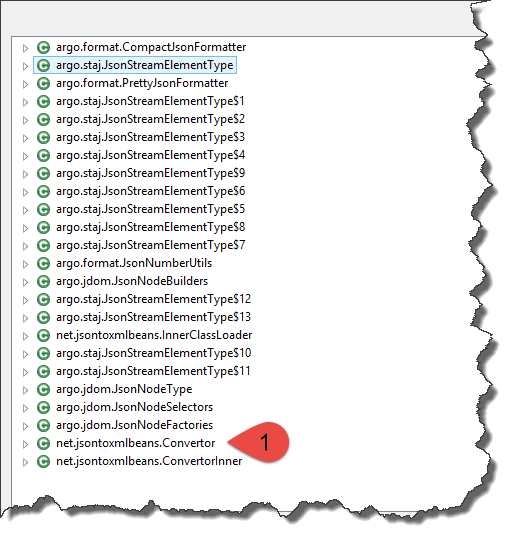 OSB found every single class with public static methods (which are used a lot in Argo) and populated the dialog with them.

My small Convertor class is lost in this list.

How to hide Argo classes?

At first I considered updating the Argo code to get rid of the public static methods, i.e., move them into a package-visible area. The change, though, proved to be too big, and I would have had to do the same work every time I needed to update Argo in my project.

This was not a strategically sound approach.

Then I realized that if the Argo classes do not look like classes, then OSB won’t pick them up. I could, for instance, rename them as *.bin.

Then, of course, JVM itself won’t be able to pick them up, too… by default. I can load them as classes if I install my own context classloader.

A Design is Born

And so the following design was drafted:

And look at the Callout dialog now! 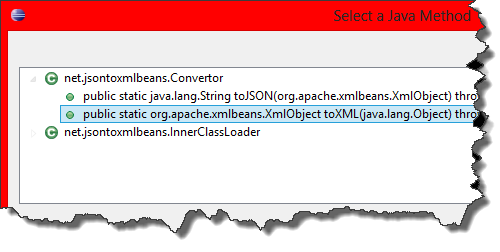 The InnerClassLoader, though, is still shown. Unfortunately, the ClassLoader API has a few public static methods, and I do not see an easy way to get rid of them.

I can live with it.

I have also included a simple hint for those who are trying to import the wrong class :)

Re-loading and re-defining Argo classes on every request or on every new thread would have a large negative impact on performance.

To avoid this impact, only a single instance of the InnerClassLoader is used, and it is shared between all threads.

To protect against race conditions, the loadClass() method is synchronized, and the first thing it does is to check if the class was already loaded in another thread.

There are a few gotchas. For instance, the call from Convertor to ConvertoInner cannot be static, otherwise JVM will try to resolve ConvertorInner dependencies, which include Argo classes. Since my classloader is not installed yet, it ends with NoClassDefFound. I have to use reflection.

But otherwise it was a pretty simple implementation:

Feel free to review the details at OSB-to-XML-for-OSB public repository.